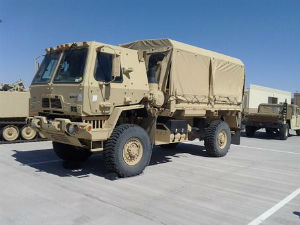 There’s no doubt that our soldiers in the military perform a wonderful and heroic service for our country. Sometimes, however, their brave work overseas seems to go unnoticed when they return back to American soil. Also, the skills soldiers acquire during their time in the military can ultimately seem useless back in civilian life in the states. Well, the Arizona Department of Transportation is doing something to try and reconcile these two realities.

Not only is the department recognizing the valiant service our military men and women they are also trying to utilize their skills when they return back home. In particular, the State of Arizona is trying to help military truckers translate their ability to navigate in dangerous conditions into legitimate commercial trucking jobs.

Picture it, a military truck transporting precious cargo along bomb damaged roads while enemy fire is coming from all sides. That’s a pretty darn dangerous job. So, being able to transport cargo along sometimes busy highways should be a piece of cake for these drivers.

Arizona National Guard Sergeant Francisco Ortiz says, “The best part is that when you’re training up on the military side, you’re way more cautious. There are more tactical vehicles so you have less visibility. They’re a little bit heavier because you’re up armored, and then transition towards the civilian side. You are more aware of your surroundings when you’re driving down the highway so you’re a little bit safer.”

Currently, the Arizona Department of Transportation is expediting military trucker’s path to becoming commercial ones. Here’s how. Military truckers can skip the on the road driving test if their military commander certifies that they have a flawless driving record and a record of driving military trucks similar to big rigs.

This approach not only benefits military members but it’s a major tool in the approach of the Arizona National Guard when it comes to recruiting. Plus, there’s a shortage of truck drivers so it definitely benefits that industry. Moreover, people are eager to hire military vets.

What do you guys think? Is this a good program?

EVs Competing To See Who Can Dismantle Tesla The Quickest

The Future of Transportation is Near, and More is to Take After

Sony Car: Did They Really Need To Make The Vision-S?