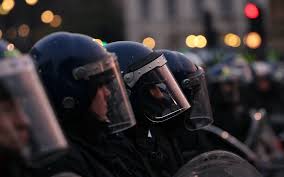 President Donald Trump makes an address to Arizona supporters Wednesday in a Phoenix rally expected to draw an estimated 20,000 people. While a great many of them come to show support for his reelection campaign, others schedule protests.

In one incident, a protestor kicked a tear gas can away from fellow protestors. Police responded by firing rubber bullets at him. One struck him in the groin. Following the protest, the injured man discovered police mockery online. Subsequently, he filed a lawsuit against the Phoenix police department for excessive force and cruel and unusual punishment.

His isn’t the only lawsuit from the previous Trump rally. Another, filed by the ACLU, collects a class action against the Phoenix PD and City of Phoenix. They argue the police used excessive force to disperse the crowd. They also state officers failed to announce the protest became unlawful. Their lawsuit also states officers fired indiscriminately into the crowd without warning.

At today’s rally, Secret Service officials will secure Veterans Memorial Coliseum, while local law enforcement secures the surrounding area. Protesters plan to demonstrate throughout the day, including a mile and a half march from Puente Arizona’s headquarters near Adams Street and North 20th Avenue to the coliseum.